In Pursuit of Perfection: Students Who Are Overachievers May Pay a High Psychological Price 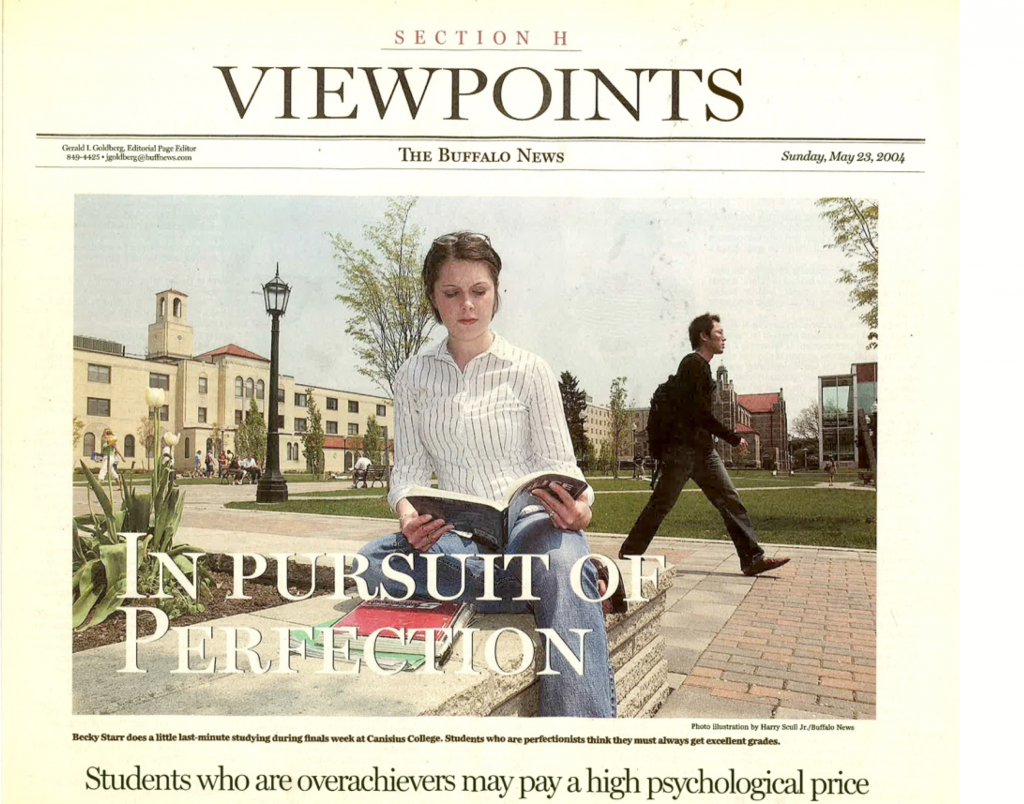 Aubrey strived to be the perfect student when she was in high school. She got good grades and was involved in just about every extracurricular activity her school offered, whether she enjoyed them or not. “I wanted to get an “A’ in everything,” she said. “I wanted to be the perfect well-rounded student so others would think I was a “somebody’ who would make it in this world.”

But when she got to college, everything became harder, and she found herself losing control. She studied while her friends were out partying on the weekends. She tossed and turned in bed the night before a test, worrying that she hadn’t studied hard enough. Too often, she’d get out of bed in the middle of the night to cram for a few more hours. Soon she began sacrificing her health for perfection.

“I developed an eating disorder my freshman year of college,” said the 20-year-old sophomore at a Buffalo college who asked that her full name not be used. “I started purging and using laxatives – anything to make myself thinner, more perfect. I couldn’t control any of the things that I’d been able to in the past, like my grades, but I could control my body.”

When her college soccer coach found out about her eating disorder, Aubrey was forced to come clean. At the time, she had gotten down to 105 pounds, a dangerously low weight for her body frame. “Telling my parents and friends was the worst,” she admitted. “I cried all weekend. I didn’t want them to see my weakness.”

For whatever reason – the need to impress future employers, the pressure of keeping up with peers or simply meeting self-imposed but unrealistically high standards – an increasing number of college students are literally making themselves sick in the pursuit of perfection.

“America is an end-product society,” said Eileen Niland, director and counselor at Canisius College. “We try to get students to focus on the process. College, like life, is a journey and students should ask themselves, “Am I enjoying the ride? Am I learning?’ Not “Will I get an “A’ in the course?’ “

Perfectionism is often seen as a good thing in our culture, and it’s important to note that it is not inherently bad. Perfectionists work hard and are generally high achievers. However, there is a fine line between being a high achiever and an overachiever.

While many contributing factors are involved in depression among college students, perfectionism, a set of self-defeating thought and behavior patterns focused on unrealistic, unattainable goals, plays a strong part.

“The perfectionist constantly strives for the unattainable, and experiences feelings of failure, despair and even depression as a result,” said Dr. Brooke Lewis, assistant director of Counseling Services at Niagara University.

Phyllis Dewey, director of counseling at Hilbert College, noted that a student needs to be evaluated to determine if perfectionism is becoming a problem. “We would ask the student if she was able to sleep at night, or if she was experiencing stomach aches or feeling stressed out,” she said. “When a student’s perfectionism is to the point of obsessive, that’s when it becomes a problem.”

According to Niland, 23 percent of Canisius students who visited the on-campus counseling center checked off perfectionism on their intake form as one of the reasons for their visit in the fall 2003 semester. So many more never seek help. “When you’re a perfectionist, admitting weakness is the ultimate failure,” Aubrey said.

Aubrey and other perfectionists measure self worth through external validations like a number on a scale or a test. Dr. Patricia Hutton, professor of economics at Canisius College, said: “Putting a letter grade on a perfectionist student’s paper is like taking a person with an eating disorder and making her step on the scale every day. The number on the scale couldn’t be low enough while the number on the paper couldn’t be high enough.”

I had dreamt of being a writer ever since I was old enough to pick up a pencil and scribble my name, but after I graduated from college, I didn’t write a thing for months. I told my college career counselor that I would never write again, and I believed that I wouldn’t. I was burnt out and depressed, battling with anxiety-induced stomach problems and certain that writing had almost destroyed me. Three years later, I understand that it was perfectionism that almost destroyed me and that my love of writing helped me to rebuild my life.

When I was a little girl, I’d always tell people, “Someday, when I grow up, I’ll be a writer.” When the cap and gown came off, I realized that society considered me a grown-up whether I felt like one or not, and that it was the time to make or break my dreams. And I didn’t think I could measure up to what that little girl envisioned while sitting on a porch stoop with her favorite red notebook in hand. It’s so much easier to dream of the end product than to actually see it through.

Hutton said she often sees perfectionism in her students, especially the girls. “I see many bright, intelligent young women who turn in excellent exams, but they won’t speak up in class because they’re afraid that what they say won’t be good enough. Sometimes though, good enough is good enough.”

Niland argued that success is personal and that there is no single definition for it. For Aubrey, however, “Success is being good at whatever you do — getting good grades, being thin, impressing others, being perfect.” When asked if happiness plays a part in success, she answered that unfortunately, for her, happiness takes a back seat.

“In our culture, there is a focus on being the best, rather than the best you can be, which allows for an acceptance of personal limitations,” said Dr. Sharon Mitchell, director and counselor at the University at Buffalo. “We cling to the notion that if we try hard enough, we can achieve anything. If a perfectionist fails to get an A, she may think she didn’t try hard enough to be successful.”

A guest speaker recently visited one of Aubrey’s classes and told students that employers look for job candidates with the total package. “He said employers look for recent graduates who had good grades in college, were involved and basically good at everything,” she said. In high school, she was encouraged to get excellent grades, SAT scores and to be involved in everything to get into a good college. It would seem that every achievement becomes nothing more than a stepping stone to reach the next level of success.

“We’re at an age when we’re trying to find ourselves, and some harmful messages are being sent our way,” said Aubrey. “I’m starting to learn that society needs to stand back in the moment, instead of always moving forward.”

Aubrey’s battle with perfectionism will be life-long, but with hardship comes wisdom. “I got a 75 on a quiz last week, and I didn’t freak out,” she said. “I told myself that there will be other quizzes and that I can do better next time. I just try to take things day by day and not focus so much on the future.” She’s also been attending church with her family and trying to seek strength from within. “I’m trying to work on being happy with who I am,” she said.

It took me two years after graduation to congratulate myself for my accomplishments. I finally began to understand what perfectionism had done to my life. I remember a favorite professor’s words: “Maria, you’ve got to calm down,” she said. “You’re going to burn out before your career even begins.”

She was right. I lived in the past for those two years, pointing fingers at anything that had ever let me down. Then I got sick of being angry and chose to move on. Perfectionism will always be a part of me, but never again will I allow it to usurp my life.

I wish I could go back and reach that college student, but I can’t. I can reach others, though. Perfectionists may deny themselves the greatest adventures involved in being human for fear of never being good enough. That is the true tragedy. Oliver Wendell Holmes once said, “Most of us go to our graves with the music still inside us.”

“I tell my students that I choose to sing all the way to my grave,” says Hutton.