Well, Tori and Julie both just wrote fantastic posts on making it through finals week so, although I too have finals on the brain while writing this post, I’m going to try to avoid making a list of suggestions for productivity (especially because my tried-and-true methods pretty much boil down to “procrastinate as long as possible”). Instead I’ll give an example, since today I’m in a great mood because I had a surprisingly productive day! 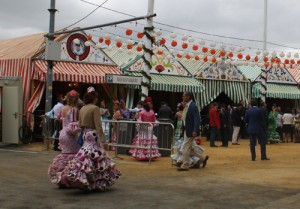 You know that classic movie moment when Ferris Bueller opens his window blinds and asks “How can I possibly be expected to handle school on a day like this?” That’s how I felt today. Luckily, it’s the “Día del Trabajador” (Worker’s Day) in Spain, so I didn’t have to pull a Bueller and skip class (which is good because I’m a long way from Chicago and I don’t own a leopard print vest).

Now, it’d be easy to think “Yay, day off,” sleep for half the day, and then lie in bed for the other half. I did that a few days ago when we had a day off for Feria (Sevilla’s spring fair). Instead when I woke up this morning I decided to go for a run. My original plan was to jog for an hour, but Sevilla’s heat (It’s in the mid-70s today) made me change that plan to forty minutes of running and twenty or thirty of walking (with another ten minutes or so of leaning against trees and sitting on benches). But I had a motivational soundtrack (the poppiest of pop music) and I felt good.

Then, after I got back to my apartment, washed up, and had lunch, I decided to see how long I could make this productive feeling last. Luckily, it was long enough that I was able to finish one of the two essays I have to write for finals, the one for my history class about “the relationship between the caliphate of of Córdoba and the kingdom of Navarra.” The page counts are slightly less than I have most semesters, 6-8 pages rather than 8-10 or 12-15, but these two essays do have the added “bonus” of needing to be en Español and so I didn’t think I should put them off until the last minute as I so often do.

After the essay, I was getting tired of being cooped up inside when it’s such a nice day out (especially as it’s rained the past few days and the forecast is calling for rain at the end of the week as well), so I took another walk. It may not sound productive, but it was just the break I needed to be able to power through a little bit when I got back. Right now I’m writing this blog post (obviously) and then I’m hoping to make a post on my personal blog and update a journal I’m supposed to be keeping for one of my other classes that I haven’t updated in… three weeks (oops).

So that’s my day so far. I also made about a dozen to-do lists—I love making to-do lists far more than I actually love doing the stuff on them, to be honest—and allowed myself a little bit of procrastination internet time. But for the most part, a very productive day! It’s a good feeling.

Readers, tell me your successes! What have you accomplished this week? Have you used Tori and Julie’s tips for getting stuff done? What are your best tips for productivity?

This entry was posted in Lauren's Lounge, Rx for School Stress, Work/Life Balance. Bookmark the permalink.