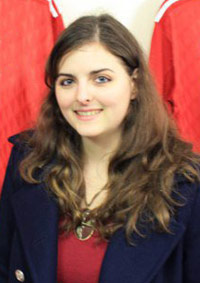 Last spring I had the chance to study abroad in London (with fellow interns Meg and Allie!). It was an amazing experience, and one I knew I wanted to repeat. However, this time I wanted to try something a little bit more intense than just going to school in a different country for a few months. That’s why I’m about to start a semester of studying in Seville, Spain. Not only will I be living with a host family rather than an apartment with other students, but all of my classes will be in Spanish!

This is incredibly exciting, but of course new experiences always come with new challenges. However, I’ve got a few ideas for staying calm and balanced while I’m studying abroad:

First and foremost, I plan to embrace imperfection. The biggest challenge of studying in Spain is that all of the classes I’m taking are taught in Spanish. Although I studied Spanish for five years in middle school and high school, I am far from fluent, and I’ve never taken a class other than a language class in another language. It’s daunting to think that I might not only get an answer wrong, but I might not even be saying the right words, and it would be temping to stay silent rather than risk making a mistake. However, one of my goals for the semester is to improve my Spanish as much as I can, and I know that won’t happen if I don’t use it as much as possible. So I’m willing to take a chance and mess up, even if it’s hard, because I know that I’ll learn so much more in the end!

I also plan to step out of my comfort zone. One of the best parts about studying abroad is getting to travel and try new things, but cultural differences can be scary! Last spring when I studied in London I never thought that I would spend a week traveling through Italy by myself, or that I would go to a nightclub in Madrid until four in the morning, or that I would find myself outside of a jail near Brixton early in the morning waiting to interview an anti-war activist being released from prison. If I hadn’t had the confidence to do these things, I would have missed out. Leadership skills like communication and self-motivation, as well as excitement and a good dose of common sense were all important in having these experiences, and I plan to do more new things this semester.

Finally, there are the plans I have in mind for when stress rears its head: for when I have to write an essay in Spanish or find my way around a city where I’ve never been. Last spring, our program directors in London suggested that we pack a jar of American peanut butter or some other comfort food for when we’re feeling homesick. I’m not taking any food, but I am bringing some books and music that I find comforting and that remind me of home. The Internet also helps! I can Skype with my parents and friends, who are a calming influence and always make me feel more cheerful.

I’m really looking forward to starting my semester in Seville. Have you studied abroad? What are your best tips for dealing with culture shock and embracing new experiences? Leave me a comment below!